In addition to grass skis, you will need ski boots, ski poles, a helmet and protective elements - a helmet and a spine/backbone protector.

Here it is necessary to point out some models of ski boots with switches on the back in the place above the heel, could prevent grass binding to properly close. The same problem may happen with boots for hard snowboard bindings. These shoes could be used but usage is not guaranteed! But otherwise you can use any ordinary ski boots. Competitors use harder models due to higher summer temperatures softening plastics.

You can easily use winter poles, but the grass skis are about 5 cm higher, so it is better to have poles 5 cm longer.

We recommend skiing in clothes with long sleeves and pants. It is also suitable to use gloves - older alpine gloves or work gloves are both fine. Much more important are protective elements such as a ski helmet (not a bicycle), a spine protector or elbow protectors - protectors for roller skates can be used.

At the beginning, it is worth noting that grass skis are something between snow skis and roller skates. The length of grass skis ranges between 65-110cm, where lengths of 65-75cm are suitable only for children. As with winter skis, shorter skis turn easier, but are less stable. Proper hand position is very important as it helps maintain the right posture and balance. As you can see, the young lady in the picture on the left is very straight and holds her hands along her body. This position is very unstable and initiating turning is difficult in this case. In the second case - in the middle picture - the position with too much protrusion of the hips. You may also notice a lack of forward incline in ski boots. For a comparison is last third image with the ideal posture, where both the inclination in the ski and the overall position of the body is properly addressed. Ever since its inception, grass skiing has been carving skiing. Over time, skiing in the snow became carving. The same principles apply to the position of the feet. Both legs and the ski must work in parallel, no knee by knee and no lifting of the legs at the beginning or end of the curve. These are elements of old technology that will not find application in grass skiing. As in the picture, it is necessary to always have both skis pointing parallel in the same direction. Also, try to keep the distance between ski and never knock ski together. Initial steps include skating, which allows you to move more easily from and to the lift. Skating on grass skis is very similar to roller skating or cross-country skiing, and even complete beginners should be able to do it.

Before you will start rolling down or even before you start on the lift, please, stop for a moment and look at grasski. These ski are relative short, with bended bow like shape. Unlike alpine ski there is no sidecut and only very minimal flex.

The tool for the first curves can be a wide stance, grasski equivalent to ski plough technique. This way ski are positioned on edges and initiating turn is much faster as well as more pressure is applied directly to outside ski. 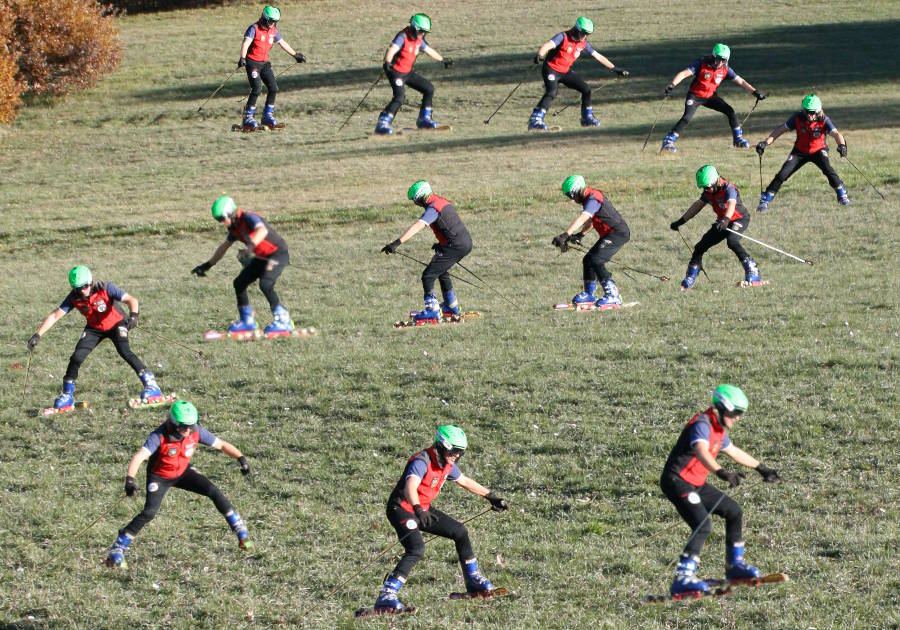 For the first curves, choose the mildest and widest part on the entire slope. There is no need to start at the top of the piste at all. Before you start rolling perpendicularly down the slope, it is good to cross the ski slope 2-3 times from side to side and test your position on whether your body center is really in the middle of the ski. Not too much in the front or  back. Now it's time for the first turn. First, try only one turn. When you are ready and you start rolling, immediately start pushing into the outer / lower ski (if you turn to the right, the outer ski is the left one). Don't worry if the skis do not react immediately, especially at low speeds the skis react and turn slowly. However, if you push into the lower ski and still nothing happens, it is a sign of a bad posture position, you probably have the center of gravity too far behind. When the skis have started to spin, try to turn the arc to the contour line - this is way how to control your speed.

Grasski has no brake and skidding is not possible so only way how to control your speed is with help of turns. The more you turn the easier it is to control your speed. At beginning it is recommended to try wide turns from side to side always ending on contour line and the longer you go on contour like the more speed you reduce. This is also reason why short slalom-like turns are not recommended for beginning. You will surely enjoy such short turns, but little later. Another exercise to master grass skiing is to turn without poles. Although it may seem simple at first glance, soon you will understand that this is not the case. So leave your ski poles down below the slope and repeat the procedure described for the "first turn" again. You can also try connecting the curves, and even here think about reducing your speed by turning to counter line - at least during the first few runs. Advanced skiers no longer have to have such an extremely wide trail and can afford to let the skis go a bit faster. Don't forget it is important to stand in the middle of the ski and push properly into the lower / outside ski. The more you push into the lower ski, the more and faster it will turnu. If you have already completed all the previous exercises and you are starting to feel confident on the grass skis, it is time to try to move on. This time, let your skis run a little faster than in previous attempts. As soon as you start turning, focus on running the skis in parallel. Also, try to push the hips into an arc, similar to faster and twisted arches in the snow. In this case, the inner skis are already partially loaded. However, the word partial load means about 30-40%. The main pressure in the lower ski remains.

On this racer, you can well notice the almost parallel guidance of the legs even in the curve. So old techniques like knee by knee are forgotten in the case of modern carving and grass skiing. With this also comes a change in the load on the legs, which are no longer loaded 100% of the force on the lower legs as in the introductory lessons, but rather 60% in the lower ski and 40% in the upper ski. Thanks to the partial load of the upper ski, you will be more stable on unevenness - the skis will not curl so much and you will ride better. The more confidence and stability you gain, the more you can try to achieve greater hips ranges and steeper turns, similar to the skier on the pictures above. At the same time, all the previous things apply about the position in the middle of the skis, the appropriate holding of the hands and, above all, the parallel guidance of the skis and legs. You can nicely see how passing through the curves and the connection of individual curves should look like in sequences of photos. You can notice not only the deployment of the pelvis in each turn and the transfer of weight between them, but also the detailed work of the feet.

Rule One: The basis of everything is a clean carving turn run one the edges

Grass skis are sold in lengths of 65-110 cm, with the fact that shorter skis are for children and pupils. Skis for adults and juniors start at a length of 80 cm. This brings us to a problem that must be faced very often on grass skis. Balance. From this point of view, grass skis are relatively close to roller skates. If you have the center of gravity too far in front, you will fall and you will also have unstable skis, which can start to vibrate -> and then you can kick together and stop. The opposite of a forward bend is "sitting" a too far behind. If you ride with position way back, the skis will not want to turn too much.

The principle of turning is different on grass skis. This 80-100cm long ski is not as flexible as a ski designed for snow. In winter, the ski bends and turns, but the grass skis do not turn by bending. The principle of turning is therefore closer to driving on inlines. If you look at the underside of the ski, which is in contact with the ground, it is barrel-shaped. Just tilt the ski slightly and they'll start to turn.

If you are used to winter skiing, for example carving slalom skis will turn within few meters, you will be a little disappointed at the first attempts. Again, this is related to skis that tilt into a curve and do not bend. This causes that, similarly to turning on a bicycle, the start of the curve is slower at a lower speed and, above all, the less experienced tilting of the ski takes longer -> the skis thus go on an arc with a larger radius. However, as soon as you learn to use grass skis and start adding speed, you will immediately find that you can turn very fast, as well as control the radius very precisely.

The fifth piece of advice is very important and can save you a lot of abrasions or sores. When skiing on grass ski, never knock the skis together. As soon as you get into turn, each ski has a different speed and the contact between the skis could cause contact between plastic elements/cages/tracks on both skis -> then a fall may follow. Therefore protectors are mounted on inside side of skis, which protect against contact of the skis.

For some, this rule is perhaps worse than all the previous ones. The grass skis must be lubricated and also washed. This is similar to winter wax lubrication, except that the grass skis are lubricated with oil. Ecological oil is used for lubrication, for example chainsaws oil (it is available at most petrol pumps). The skis must be lubricated before each skiing session. Competitors sometimes lubricate their skis more often to keep the going each run on maximum, sport skiers and occasional skiers then lubricate them less often. The skis are washed mainly depending on the dirt you have in ski. As with lubrication, competitors wash their skis after each session, sport skiers usually once in a time (depending on the dirt and slope conditions). If you don't know when to wash your skis, the simple advice is -> as soon as you think the skis are slowing down, it's time to wash your skis.

Your shopping cart is empty!